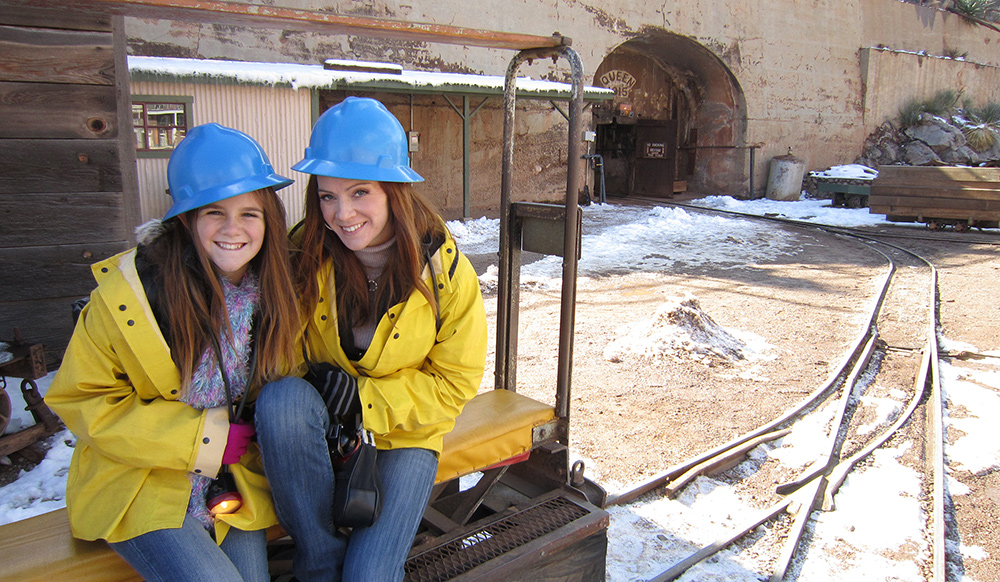 Queen Mine Tour and Bisbee

What on earth is a BISBEE?

Bisbee…..what’s a Bisbee? It’s a mining town just a few miles south of Tombstone. This town also has history as it was part of the Tombstone story (Doc Hollidays girlfriend “Big Nose Kate” lived there and it’s where people from Tombstone had to ride to get supplies). Once dubbed as the largest city between St. Louis and San Francisco, Bisbee was a real copper mine.

The Queen Mine operated continuosly for 100 years and was the largest production of all mining districts in the world…producing metals valued at 6.1 billion (valued in 1975)!! We got to take the tour of this mine! We got our own hard hats, very flattering yellow raincoats, a mining light and a ride on a mining cart 1,500 feet down into the mine. We saw the elevator shafts, original drills and leftover precious metals still in the mine. Our tour was led by an actual miner who worked in the mine and had a lot of interesting facts and stories to share. It stays 47 degrees down there, but that was nothing compared to outside.

The night we showed up in Bisbee it snowed on us and left a nice little blanket on the charming town (and our car)!This adorable town was built up around the mine, with most homes and businesses built directly into the mountain. With it’s old buildings, unique setting, red and multi-colored rocks, a massive mining pit and a dusting of fresh snow; this was an absolutely charming town that we really enjoyed. The history behind the mine is fascinating, check it out: http://www.queenminetour.com/History

Tunnel coming in to the town of Bisbee, it had just started to snow

Queen of the Copper Mines, Bisbee has some amazingly colored rocks, mines and massive mining pits 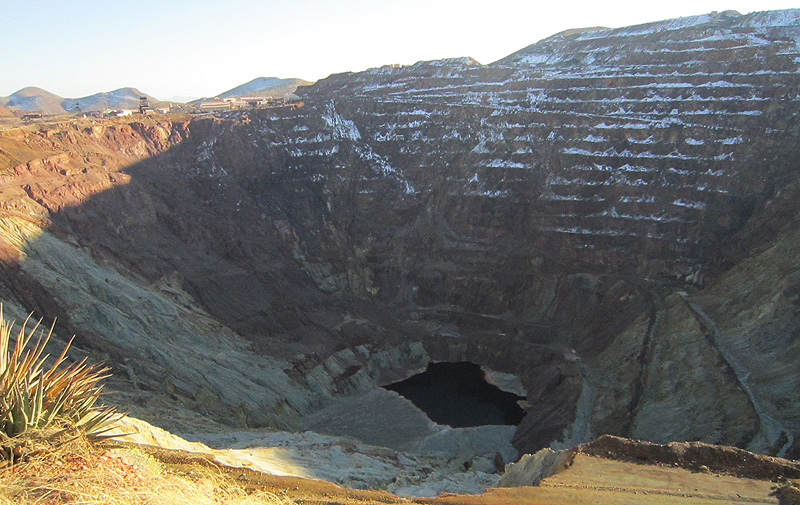 Speaking of Massive Mining Pits….Check out the 850ft deep Lavendar Pit (water in bottom and snow around the top edges). That’s a looong way down 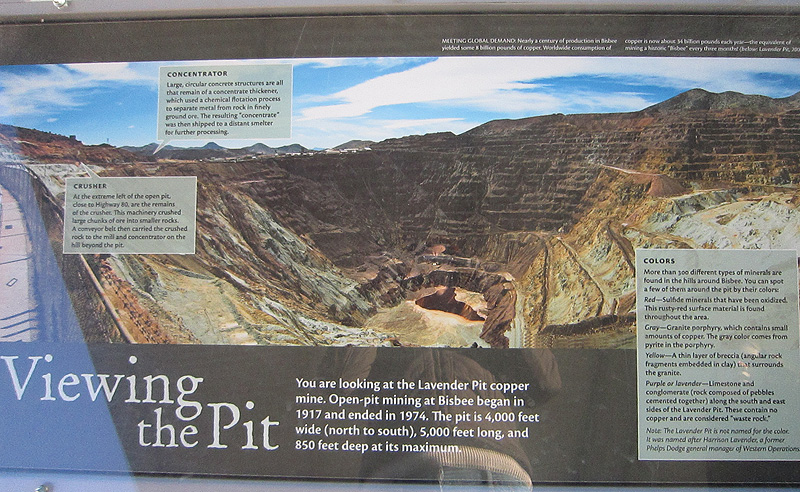 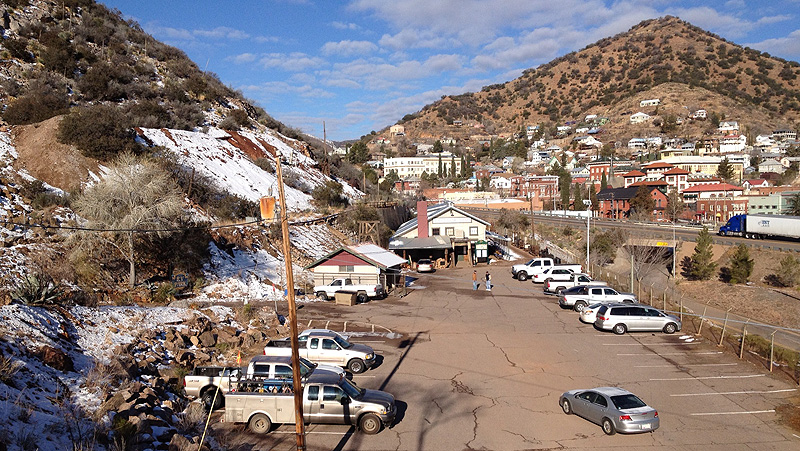 Light dusting of snow on the town of Bisbee (Queen Mine entrance seen in center of pic). It looks nice and sunny, but trust us…it was cold. 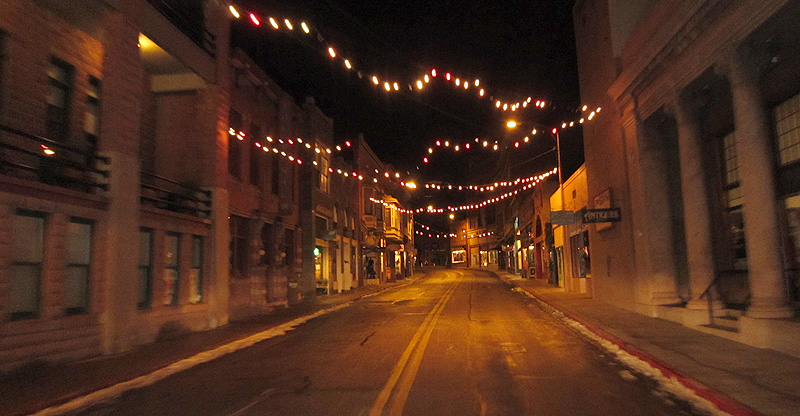 We took a drive through the heart of Bisbee one night. No one around and the street lights all lit up, surrounding old historic buildings and quirky shops; this was so much fun! 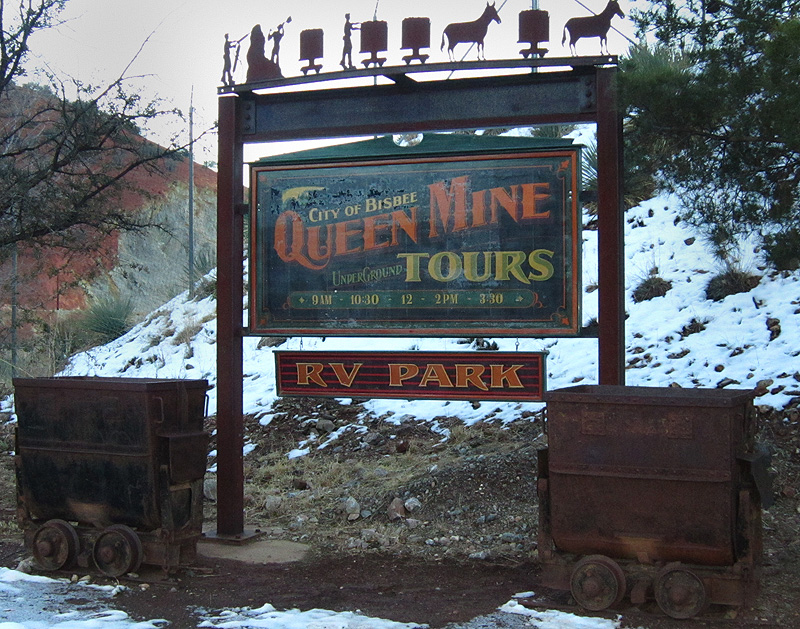 The RV park was attached to the Queen Mine, making it very convenient for us 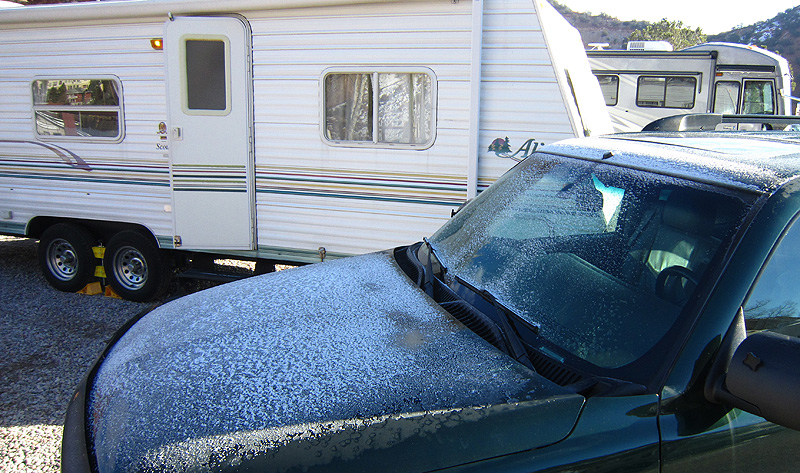 Our car and trailer were attacked by snow during the night. By the time we took the picture most of it had melted, but we know our trailer and truck’s tires were begging for some slippers to keep warm (they are southern california natives ya know)! 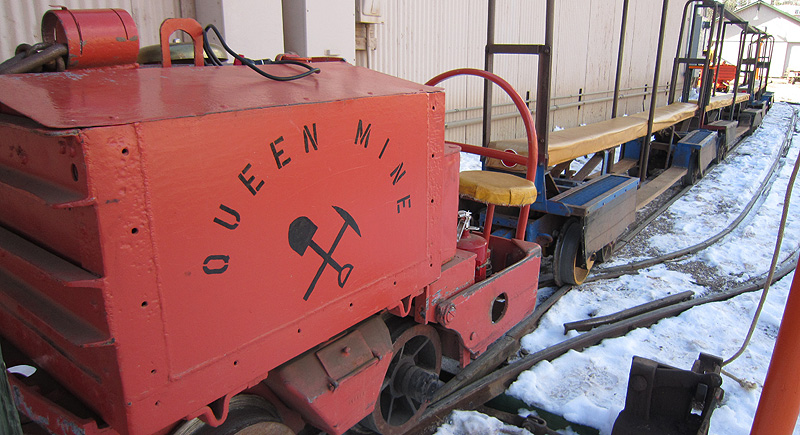 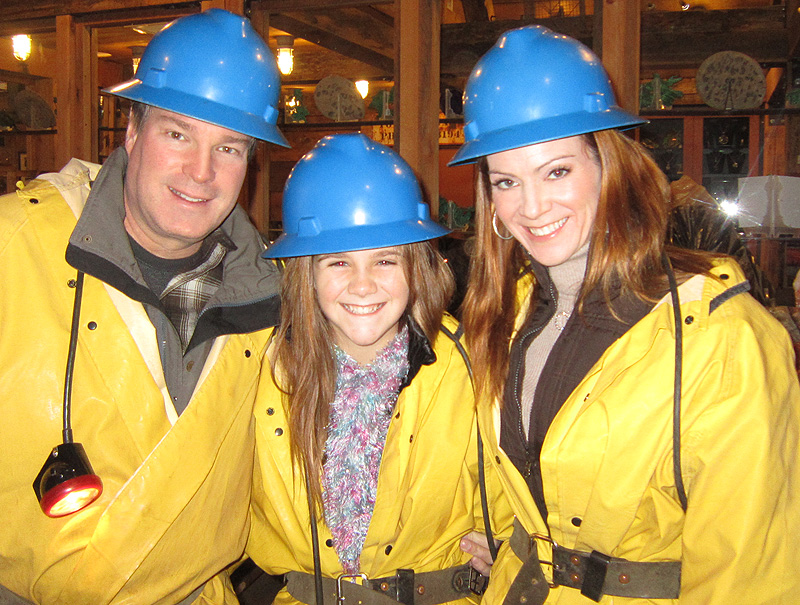 No turning back now, we are committed to going 1500 ft down into a mine with a bunch of people. Thank goodness we have yellow slickers for protection…haha 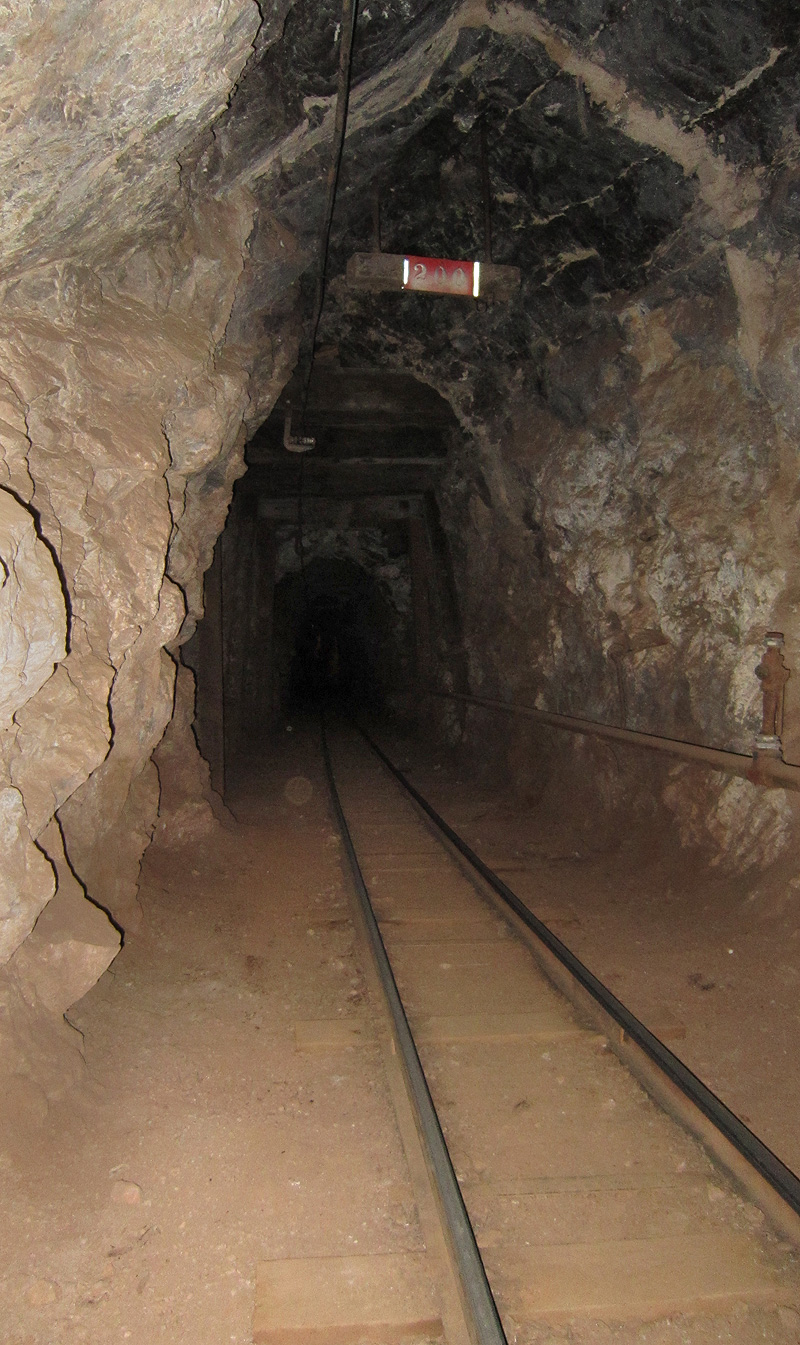 Looking back down into the mine shaft. If you look above there is a marker indicating how far down you are (they had one every 100ft). Little one loved keeping count! 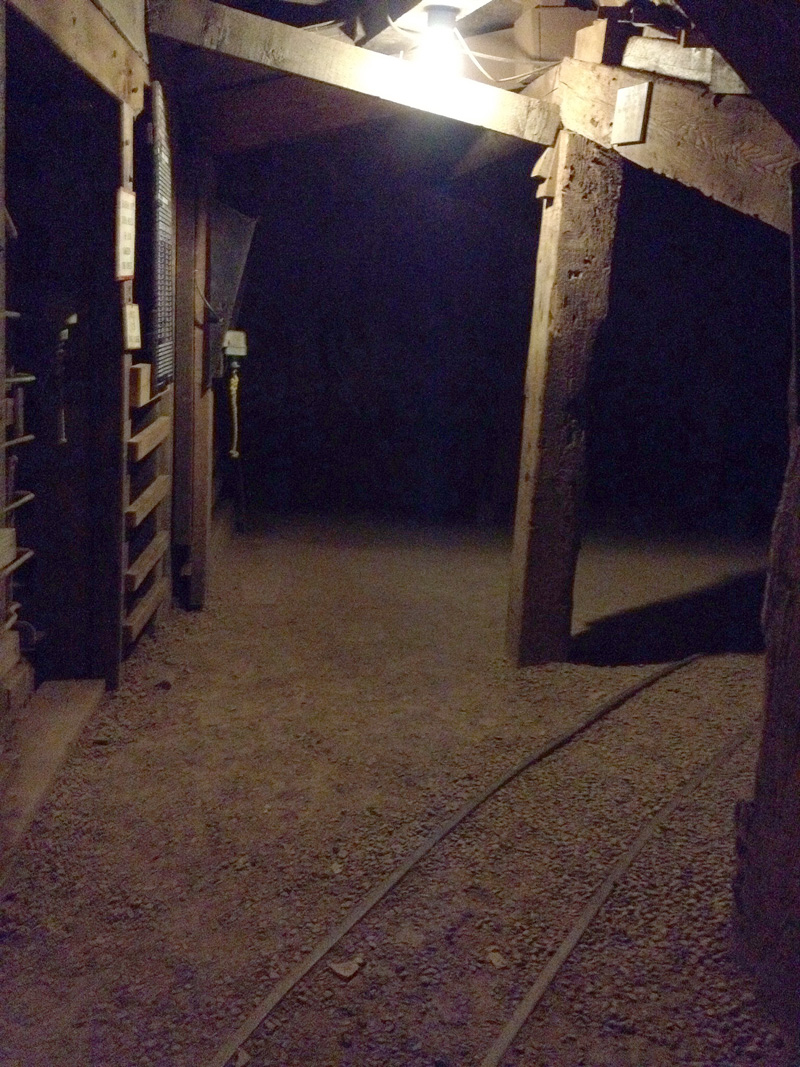 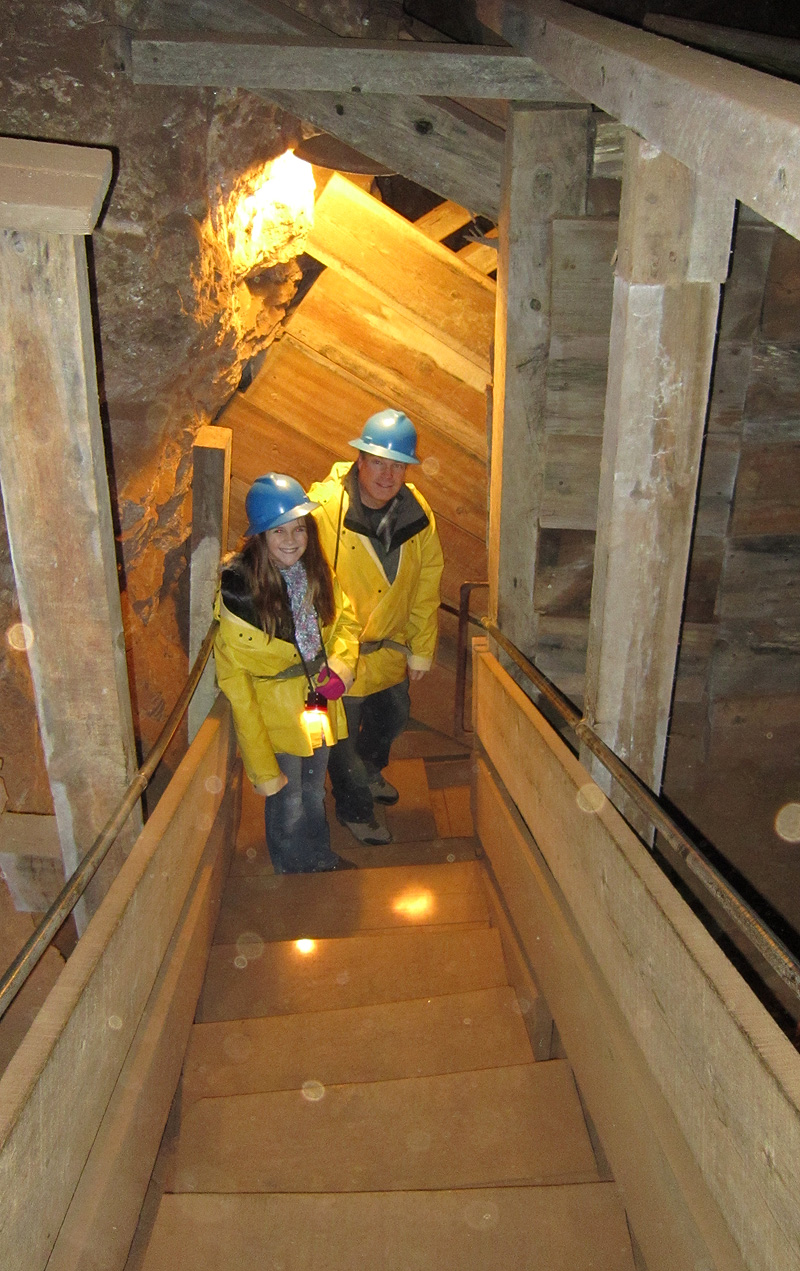 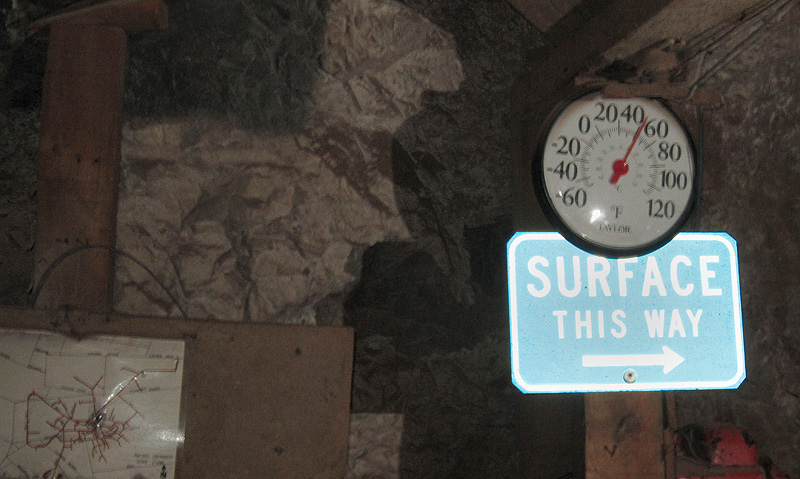 Down at the 1500ft level we got off and walked around with the guide. They weren’t lying when they said the mine stays about 47 degrees year round. Note to all, if you ever get lost in a massive mine, just look for the “Surface this way” sign…it’s better than google maps! haha 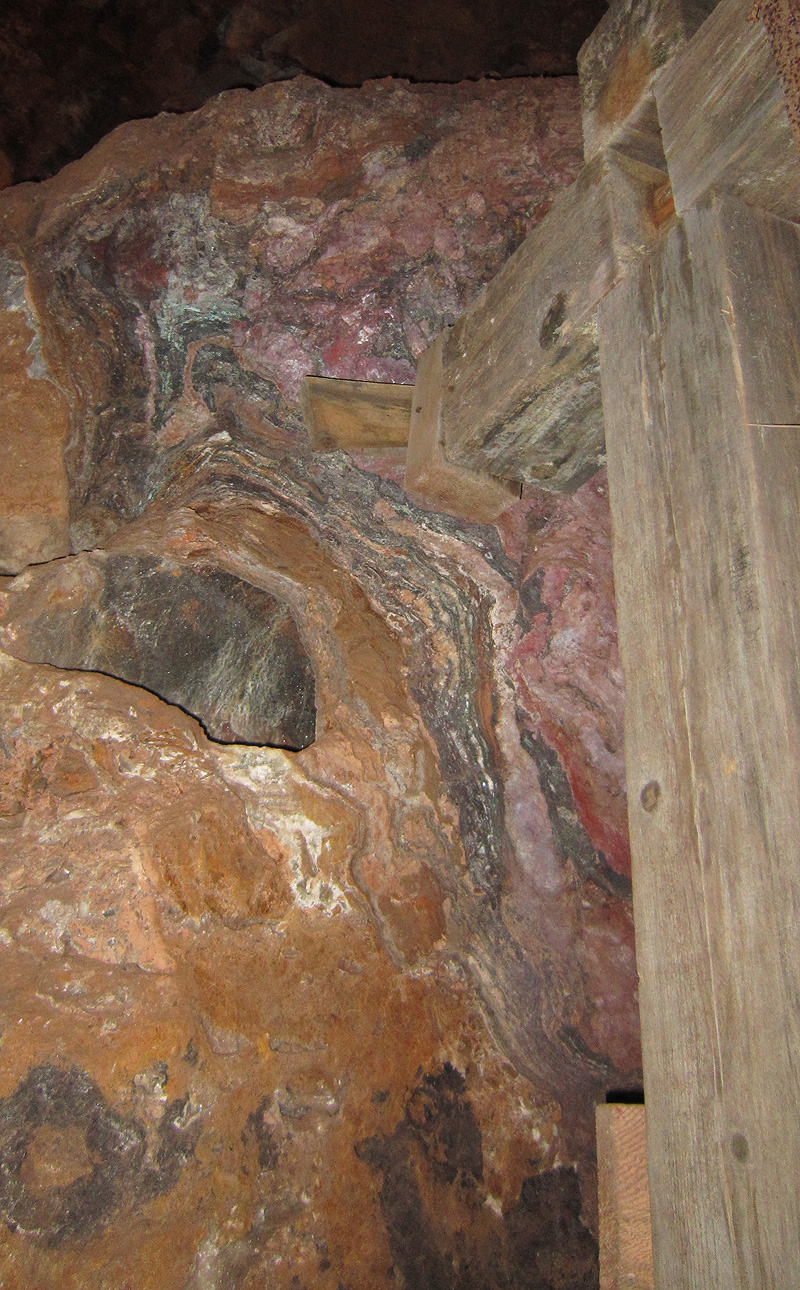 Actual veins and remnants of precious minerals 1500ft underground. Look at the amazing swirls of color embedded deep within these rocks! We stood right next to it…quick where’s my pick ax? 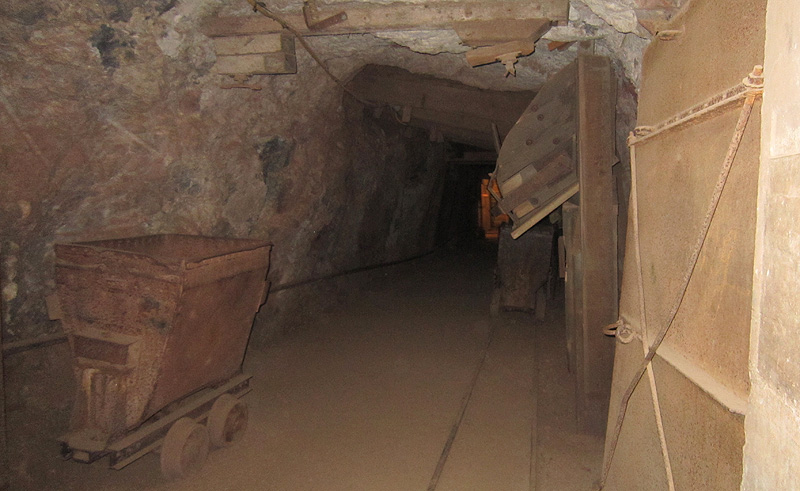 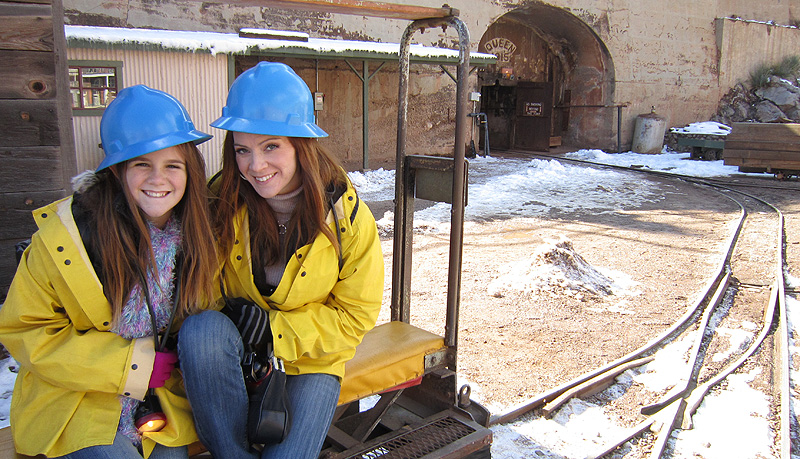 We followed the sign and made it out alive….apparently the yellow slickers and blue plastic hard hats are good luck! Although, I’m not sure what was colder?